Iconic and loved around the world, can stadia be places for more than major sporting events, a home for one’s team, a destination for a code’s followers and the global symbol of each Olympic Games?

How else could these costly structures be utilised for the benefit of communities, to ensure a more social return on investment?

Smart cities are transforming their stadia beyond legacy usages into futuristic centres, integrated with technology and transportation nodes, to realise a new return on investment, and ultimately, a place where people want to visit.

The Beijing National Stadium, known as the Bird's Nest, built for the 2008 Olympics, costs millions of dollars each year to maintain, and while it has become a local tourist destination, it stands empty most of the time.

Securing long-term benefits from hosting the Olympic Games is now a recognised goal for the Olympic movement. At the end of 2017, the International Olympic Committee (IOC) adopted a set of policies to better assess and nurture games’ legacies, formally embedding positive legacy planning into every stage of games candidature and preparation, helping hosts to unlock value for the decades ahead and synchronising this with the host city’s long-term urban development goals.

While Rio de Janeiro’s transport systems have benefited long-term from the 2016 Summer Olympics, the Rio sporting venues quickly fell into disrepair. In Pyeongchang, host city of the 2018 Winter Olympics, its 35,000-seat temporary stadium was built to be used just four times. It might seem strange to pull it down, but Pyeongchang is a poor rural community with a population of just 45,000 and no obvious need to keep such a stadium.

London’s Olympic Stadium’s (2012) legacy includes converting it into a multi-sport venue, hosting concerts, exhibitions, football, athletics and a host of other sporting events after significant transformation work. It is now home to West Ham United Football Club and permanent home to UK Athletics.

Recognising the importance of the post-event usage of stadia, the governing body in charge of delivering the Qatar 2022 Football (Soccer) World Cup is called the Supreme Committee for Delivery and Legacy. High on their agenda is the need to design the stadia and infrastructure to achieve the best cultural, social, economic, sports and environmental legacy after the event.

Originally dating from the 1800s, and upgraded for the Melbourne Olympics of 1956, the iconic Melbourne Cricket Ground (MCG) is also a busy venue for sports. With cricket in summer and football seasons as well, it is used much more than the international average of just 20 days per year. In the basement below the grandstand it hosts the National Sports Museum, which attracts crowds to the venue seven days a week. 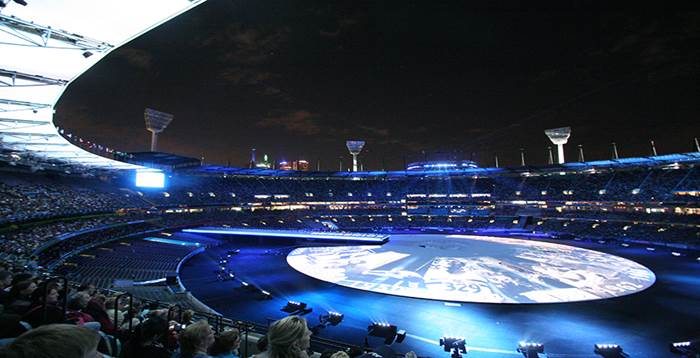 The future of sports stadia - Enhancing fan experience with technology

Stadium developers and operators realise that they need to put people at the centre of stadia design. Retractable roofs, cushioned seats, bars and food outlets are all valuable inclusions, but if the fan experience is mostly enhanced via the integration of technology, then that is where investment needs to focus.

The MCG incorporated a high-density, free wifi network, along with improved 3G and 4G mobile network coverage into the venue in 2016. The new technology infrastructure enables fans to access real-time content, post on social media, use apps and stream video. Data usage doubled in its first year alone and continues to climb.

Levi’s Stadium, which hosted the Super Bowl 50 in 2016, set a new record for data transfer, 63 percent higher than the previous high of 6.2 TB at the University of Phoenix Stadium during the previous year’s super bowl.  By halftime, Levi’s Stadium had surpassed the previous record for data transfer at a sporting event. Of course, massive data usage provides the ability to mine that data to give the facility operator better insights into their customers’ preferences, and the ability to tailor their offering accordingly.

A stadium is currently being built in Arlington, Texas, USA, for a billion-dollar sport, which is transforming our traditional perception of the purpose of stadia. It is being built specifically as a venue for video gaming competitions.

Video gaming – or eSports – is becoming big business. When the Texas stadium is completed at the end of 2018, it will be the biggest eSports stadium in the USA, with capacity for 1,000 spectators. In 2017, Beijing’s Bird’s Nest stadium was the venue for 40,000 spectators who came together for the final of the world championships of one of the most popular video games in the world, Legends of the League. By 2022, eSports is expected to be a $2.3 billion industry.

Could this be another opportunity to re-use stadia for other, perhaps less obvious ‘games’?

Japan’s Sapporo Dome was the first to switch between two entirely different surfaces: baseball games are played on an underlying artificial turf field, while football games are held on a grass pitch that slides into and out of the stadium as needed. The stadium even uses its turf conversion hovering system to facilitate a snow-making process for skiing competitions.

Other multi-use sports stadia include the University of Phoenix. While the natural turf playing surface is outside, exposed to daylight, the floor of the stadium can be used for other purposes, including motorsports events, or seating for concerts. Aurecon has already had preliminary discussions for a potential retractable pitch stadium in Australasia.

It’s time to think outside the box to make these buildings work all year round, not only for sports fans, but for the whole community. Just imagine a multi-use, more frequent destination for more people. For instance, redevelopment options for Poland’s Stadion Polonii Warszawa have included not only adding a running track underneath for regular local athletics meetings, but also integrating a hotel into the site.

The Louisiana Superdome was used as a disaster centre for Hurricane Katrina in 2005. It turned out not to be up to the task, unlike the purpose-built Slowtecture M Tennis Stadium and Disaster Centre, in Miki City, Japan, completed in 2008. This earth covered dome was created after a devastating earthquake in 1995. The complex has a dual function: first, as a disaster management centre; second, as a sports complex with nine tennis courts whose centre court is surrounded by 1500 spectator seats. The mounded vegetation and earth provide insulation so on a 40-degree day it’s 10 degrees cooler inside. Four access points are not only for crowds attending matches but can accommodate large lorries for transporting people and supplies in an emergency. The skylight louvres provide supplementary ventilation and the skylights themselves reduce lighting costs.

Other stadia could be adapted to work better as disaster centres, with extra attention paid to independent power, plumbing and water collection.

We already have convention centres with moveable floors and rotating banks to reconfigure spaces for a range of events for audience viewing/capacity.

Why couldn’t a stadium that has a 40 000-seat tray for large events, convert to provide a concert venue for 1,000 with no compromise to the quality of the performance and audience enjoyment?  It should not be hard to adopt, for instance, a sectioned approach and moveable acoustic walls. Marvel Stadium in Melbourne’s Docklands has an “intimate mode” where 75 percent of the 54 000 seat stadium is partitioned off with acoustic curtains supported from its operable roof, for this very reason. Completed just 18 years ago, it is about to undergo a major redevelopment to become a more integral and accessible part of the community that has grown around it.

The vast halls needed for large rock concert and sports crowds, could, at quieter times, be used as gallery spaces. The new Western Sydney Stadium will not only accommodate 30,000 sports fans, it also includes spaces for a wide range of community events. Venue versatility leads to multiplier economic benefits beyond the not so easily measured buzz and wellbeing, sense of community and excitement that come from taking part in events.

Stadia provide multiple opportunities for recreation, work, active and passive sport, and cultural activities using integrated facilities, that enhance liveability in the cities in which they are located. Cost efficiencies are won from having the venues work harder, for more days, attracting audiences and participants, and investment. If, for instance, food outlets are accessible from outside the stadium when events are not on, the space outside the venue is better utilised. Combine this with repurposing concession areas as pop-up shops for independent designer/makers and you have an any-weekend indoor/outdoor family destination. There are great synergies with stadia and the local community’s desire for gyms and fitness centres. The emergence of 24/7 gyms over recent years has seen a shift in this industry with the strong growth predicted to continue enhancing the ability for stadia to house these facilities and attract clientele.

And back-of-house, could welfare agencies be allowed access to the changerooms and other facilities for homeless shelters, drop-in centres and programmes?

When new stadia are built, they need to not only be future-proofed for fan experiences but be multidimensional transformer-buildings.

Again, in Australia, the world-recognised South Melbourne Primary School, a vertical school over five levels, includes infant care and health and welfare programme spaces and consulting rooms within the school fabric. The community has access to the sports facilities out of hours, making this inner-city school a 24/7 community asset.

The future is here now and it’s transforming how we think of public spaces.

Smart cities around the world are realising that mobility is one of the key ways to become more liveable, sustainable and competitive.

Now, cloud-based mobility platforms are being developed that manage information flow between a variety of components in the transport ecosystem and beyond, to connect passengers with both transport options and city infrastructure. Imagine arriving at a venue and being able to access an app that tells you which streets to avoid because there is excessive vehicle or foot traffic. Or, if driving, being updated on parking availability in real time.

It is no longer acceptable to build a stadium without considering how people will arrive and depart.

Implementing ideas such as these would realise the public investment in these monolithic structures for a wider community, bringing people to a stadium not only for sport but for entertainment, arts and culture, safety, and even welfare.

Returns on investment, particularly when public funding is key, aren’t always financial: proving returns could be in the form of cost or energy savings, welfare savings, or successfully supporting a development strategy. During its four years of operation, the Deakin Cats Community Centre at GMHBA Stadium (Kardinia Park) has welcomed over 80 000 people through the doors. The hub for delivery of the Geelong FC’s Community Foundation and Engagement Programs including BioCATS, Just Think, Cyber Cats, and Wada Nyooro, involves a partnership with the local university, and contributes to the Geelong Football Club’s community vision for greater engagement with the broader Geelong community, by providing a free, state-of-the-art facility. Even in creating infrastructure that appears single purpose, encouraging wider consultation, with an openness to new ideas, can improve outcomes for longevity, relevance and profit.

Innovative partnerships evolve for multi-purpose projects, with further possibilities developing from a shared understanding of the vision. For example, stadium optimisation doesn’t only involve asking “how large can we make the space?” Rather, it involves understanding a community’s requirements, now and in the future.

Those who successfully shape the stadia of the future will be those who realise that our world is changing. They will have the boldness to not only let go of the status quo but to question it, reimagining these iconic public spaces, transforming what they can do and how they serve their communities.

Mark is a specialist in the design of stadia and leisure-related projects, such as Marvel Stadium, Perth Arena, GMHBA Stadium Geelong, and the Melbourne Cricket Ground, through his role as Technical Director at Aurecon.

Our blog: Just Imagine | Building memories through infrastructure: why it matters

Our Blog: Just Imagine | How Can Cities Be 'Smart' If They Can't Think?

Our blog: Just Imagine | Reinventing the third place for the digital dimension

Our blog: Just Imagine | Can you have a sporting spectacle without spectators?