With an average rainfall of 1,115mm per year, Auckland’s combined stormwater and wastewater network is increasingly challenged by the sporadic and heavy downfalls. St Marys Bay and Masefield Beach are particularly vulnerable with regular releases of combined sewer overflows (CSOs) during heavy rainfall events.

The St Marys Bay and Masefield Beach outfalls each experience approximately 100 overflow events every year. Home not only to the largest marina in the Southern Hemisphere, St Marys Bay includes Westhaven Beach which is popular with marina residents and visitors to the city during the summer months.

Auckland Council sought to reduce the frequency of the releases of overflow into the Waitematā Harbour by providing storage in the form of a large diameter pipeline. With the urgent need to improve the water quality of Auckland’s Waitematā Harbour, Aurecon embraced the advantages of using innovative digital modelling, allowing the design to be completed far more quickly and more accurately – which in turn has allowed construction to commence much sooner than a traditional design project.

The operational functionality of the project is complex. There were also many different, interacting elements of design needing to be coordinated, resulting in a technically intricate project. Aware of this complexity, the design team made a conscious decision at the start of the design process to utilise various standard industry 3D modelling software packages for the different technical components of the project and move away from more traditional, manual design methods.

“This is a complex project, but we planned our scope carefully, and with such a skilled project team working on the project, I was 100 per cent confident that we would produce a first-class design for our client”. says Aurecon Project Manager Margaret Cobeldick.

Significantly, the decision was taken much further than just undertaking individual elements of 3D design modelling. As planned, the design team created an interactive modelling ‘space’ for the project, where design options from the individual modelling packages were integrated so that each time an element of modelling was produced or adjusted, the changes would immediately flow across into all the other 3D models.

Aurecon utilised the experience and expertise of our offshore design team in Tshwane (South Africa) for the St Marys Bay Area Water Quality Improvement Project and this is where the digital modelling really came into its own. At peak there were teams in five different offices working on the same base 3D model. Clashes were quickly identified.

The hydraulic performance of the project was particularly sensitive to the physical arrangement of the built assets (especially the storage inlet and outlet levels).

Through 3D digital modelling (see Figure 1) the design team were able to make necessary changes and spot potential conflicts easily to optimise the design and ultimately reduce combined overflows to provide better outcomes for the environment. The final design of the pipeline means that the majority of the diluted wastewater that currently gets discharged into the harbour will now be stored and returned to the wastewater system. 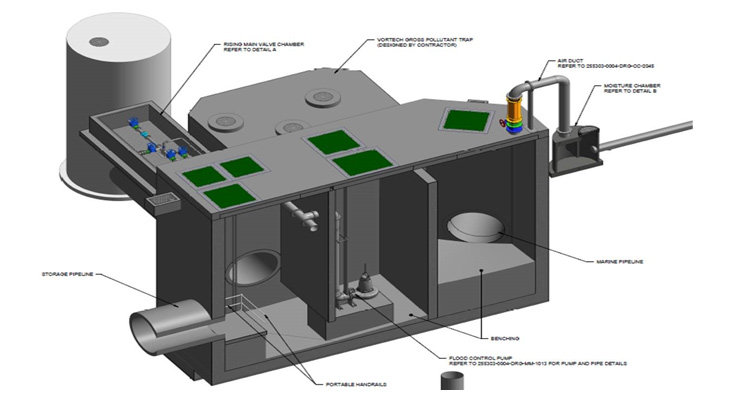 Project peer reviewer Ian Noble from Stantec in the United Kingdom said of the design “The balance between outfall overflow frequency and storage was a very good piece of work.”

The coordination and integration of all the necessary data into the original hydraulic model flows provided by Auckland Council meant that the Aurecon team were able to produce the detailed 3D design faster and more accurately as it removed the need for manual updates for each design iteration.