Dynamic lane systems have been trialled in cities around the world, but as a New Zealand first, dynamic lanes that allow the full-road width to be rearranged and optimised, are being trialled on one of Auckland’s notoriously heavily congested roads.

From January 2018, Auckland Transport is trialling dynamic lanes along Whangaparaoa Road for twelve months with the intention to reduce traffic congestion during peak times for drivers. The route was chosen for the twelve-month trial because of its existing configuration: the road has one lane in either direction and a wide central median strip.

Aurecon is providing detailed engineering designs, topographical plans and traffic surveys to Auckland Transport throughout the trial. The predicted improvement to transport networks to work seamlessly will help to ease congestion and create more transport choice and convenience.

To increase road capacity, the system allows the full road width to be rearranged and optimised during peak hours by using LED lights embedded into the road surface to mark traffic lanes. Switching these lights on and off is a quick and safe way to manage traffic flow with an additional lane during heavy congestion.

Traffic control gantries provide drivers with a clear display of which lane, or lanes, are available to them. 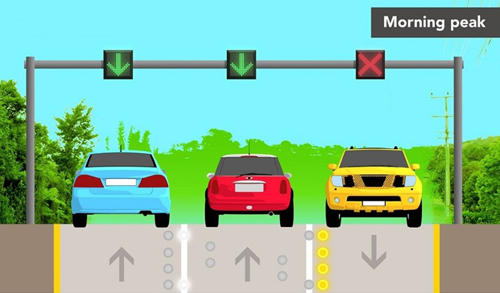 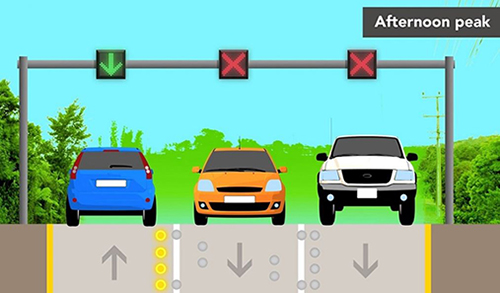 For the first three months of the trial, the dynamic lanes operated during the afternoon peak period only. As the interim data showed positive results, the trial was extended to the morning peak period as well. In both peak periods, there’s an average of 1 900 cars per hour travelling along Whangaparaoa Road and, to date, the dynamic lanes system is saving between two and seven minutes of travel time per car, per peak period.

This staged approach has allowed road users to develop familiarity with the system, and time to address concerns raised by residents along the affected trial area. Concerns include making right turns in and out of side streets when the median becomes a free-flow lane, and the difficulty of crossing the road on foot during peak times.

The best way to monitor safety

While the dynamic lanes on Whangaparaoa Road have been designed to increase efficiency and to trial a valuable tool for addressing congestion across the region, the safety of road users is also a key element of the design.

To optimise safety, Aurecon led the detailed design through the road safety process, to mitigate any potential safety risks. Aurecon will continue to work with the Road Safety Audit Team to close out the post construction process.

The dynamic lanes trial is enabling capacity of the road during peak hours to increase, while allowing ease of access for all other users outside of these hours. Better traffic flow for drivers in and around the area contribute to the concept of smart cities as productivity can improve and people can become more connected.