The Parramatta Light Rail is future-proofing a growing Western Sydney

Stage 1 of the Parramatta Light Rail will connect communities, make travel easier for work and leisure, and ensure that commuters can move around and explore what the region has to offer. It is one of the New South Wales (NSW) Government’s major infrastructure projects being delivered to serve a growing Sydney.

The 12-kilometre light rail project will integrate with other modes of transport to create seamless transport mode transfer and access for commuters.

With our joint venture partner, WSP, Aurecon is responsible for delivering all design services for Stage 1 of the Parramatta Light Rail, for the infrastructure contractor, Parramatta Connect, a joint venture between CPB Contractors and Downer. Stage 1 is the 12-kilometre alignment from Westmead to Carlingford, via the Parramatta CBD and Camellia, with a mix of on-street and dedicated corridor tracks.

Our work includes design and construction up to rail level, comprising:

The joint venture is using digital engineering for 3D modelling to tackle the engineering challenges. These digital tools are gateways to solving the complex interaction between existing and new utilities and below ground services, safety in design, and construction certainty.

The 3D models capture each element of the project’s design, including structures, roadside infrastructure (for example light poles and signposts) and foundation supports, as well as underground utilities.

The joint venture federated all design elements in the 3D models to enable detection of potential clashes between utilities, structures and road infrastructure. Clash detection and coordination helped to find and remove potential incompatible interactions between differing elements of the design long before actual construction began.

The Parramatta Light Rail includes the installation of approximately eight kilometres of concrete track slab, the majority being within the existing streetscape between Westmead and Parramatta.

A detailed review of local and international track slab installation standards and methodologies was undertaken during the tender stage to determine a design that reduces construction time and adverse impact to the community, whilst still providing a durable and robust asset.

An innovative fibre reinforced jointed concrete track slab solution was adopted for much of the alignment which uses less steel for reinforcement and enables faster construction on-site. Numerous track slab variants were used to achieve the functional requirement and the high standard urban realm outcomes, particularly along Eat Street in Parramatta, including the old sandstone arch of Lennox Bridge.

The designs have been sensitively engineered with the urban realm proposals to enhance the visual appeal of the alignment through Westmead, Parramatta and beyond.

In a first for NSW, up to one kilometre of ‘green track’, which involves planting grass or low plants between and beside the tracks, will form a key attraction in three areas across the alignment.

Green track contributes to increased biodiversity, noise reduction, and urban cooling, which are great outcomes for the people who live and work in the local area.

No dig technique for Eat Street 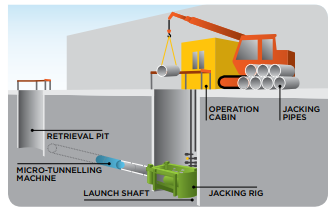 It also minimised accidental impact with other pipes, electrical wires and utilities, and reduced noise, dust and vibration. It allowed businesses and the community to continue to access public spaces above ground while micro-tunnelling work was undertaken.

In total, nearly 600 metres of micro-tunnelling will be undertaken on the project.

Stage 1 of the Parramatta Light Rail is being delivered to serve a growing Greater Parramatta region and support the development of Parramatta as Sydney’s second CBD. Communities and local businesses will benefit from the convenient ‘turn up and go’ public transport option at their doorsteps.

With 16 stops along the 12-kilometre route, passenger services are expected to begin in 2023.

The project has achieved an Infrastructure Sustainability Council rating of ‘Leading’ for design. Once complete, the project will achieve a 36 per cent reduction in carbon emissions through construction and operations, simply by designing areas with a wire-free system, using supplementary and recycled materials in concrete and asphalt, and re-using existing rail, sleepers and ballast.

Aurecon with our partner is delivering value to communities, visitors and end-users by designing a transport system that meets their needs today and in the future.