The Australian transport sector is under increasing pressure to reduce carbon emissions, whilst also managing a fuel supply chain that relies heavily on foreign import partners.

The transport sector is one of the country’s largest end users of energy and contributes more than 18 per cent of the country’s total greenhouse gas emissions. Coupled with the fuel chain’s high reliance on overseas partners, this presents an interesting dichotomy for the industry, incentivising research and development into new technologies that can address one, or both, of these issues.

One of the most exciting prospects for the transport sector is hydrogen fuel. Today, hydrogen’s most common use is as a chemical ingredient. Tomorrow, it could be the zero-emission alternative for the movement of fleet and vehicles throughout Australia. Aurecon’s Hydrogen for Transport report, for the National Hydrogen Strategy Taskforce (Department of Industry, Innovation and Science), presents the prospective Australian use cases for using hydrogen in transport. The report was referenced in the National Hydrogen Roadmap from Dr Alan Finkel, Australia’s Chief Scientist, spelling out how Australia can embrace and develop clean hydrogen as a fuel.

As with any emerging technology, developing hydrogen as a fuel presents a number of risks and barriers that need to be navigated in order to unlock the benefits the technology can provide:

Hydrogen for transport: pilots and trials

Aurecon’s study explored the hydrogen for transport opportunity, and the likely success of pilots and trials, through a four-step approach: 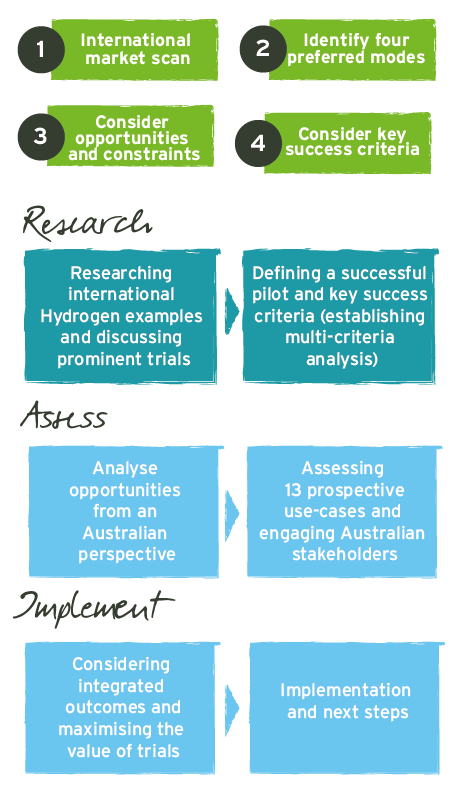 International markets, particularly the USA and Europe, are further progressed in their adoption of hydrogen technology and this enables Australia to apply lessons learned on demonstration, pilots or trials projects. A trial in Germany has recently been expanded to be a trailblazing project with close to 100 hydrogen fuelling stations near major urban areas. This infrastructure supports both light-duty and light commercial fuel cell vehicles, with additional stations expected to grow with the vehicle market.

The development of Australia’s hydrogen resources has the potential to provide a reduction in greenhouse gas emissions as well as a more reliable fuel supply for the transport sector. In addition, the country could build an export industry around hydrogen.

A critical step in the implementation of this technology will be the trials, demonstrations and pilots that can bring the hydrogen for transport vision to life.

Aurecon’s study identified that the four preferred modes of transport for hydrogen pilots would be: fleet vehicles, buses, trucks and materials handling. These transport modes offer the best opportunity to provide the transport sector with insights into transforming the energy market with hydrogen for transport and, more broadly, a hydrogen economy.

A systems thinking approach is pertinent to the hydrogen for transport opportunity. In progressing any pilot or trial, a parallel investigation of long-term benefits to the broader transport system is required to fully understand the potential in growth for the domestic hydrogen economy.

Aurecon’s report recommended the following integrated projects after they were assessed to offer the best value:

The real benefits of trials, demonstrations and pilots do not occur in isolation. Partnerships and co-investment from commercial entities and the Government will support first-mover trials and refuelling infrastructure.

Where to from here?

Support for a hydrogen economy has been a long time coming and Aurecon’s report highlights that what we need now is for Australia to fast-track hydrogen projects, and Government to have a clear role in supporting this high-potential new industry as it scales up.

Australia has some of the very best renewable energy resources in the world and should make the most of those the same way it does for its other resources. Australia can play a leading role in modelling the transition to hydrogen and how you go from one source of fuel to another.

For Australia to develop a successful hydrogen industry, Aurecon advocates pursuing a suite of initiatives to ensure a successful holistic approach that sees our technological, commercial and industrial interests enabled, to take an appropriate level of risk at the right time:

Of course, there are challenges when you transition from one source of energy to another over time without creating significant disruption both in terms of the stability of physical infrastructure, but more importantly, what it means for different geographic regions. This is why it is so important to demonstrate success through trial projects and facilitate the sharing of lessons learned across the industry.

With a fully developed hydrogen economy plan, key stakeholders (including government entities, end users, manufacturers, and investors), will have a clearer understanding of the end-to-end value proposition, enabling decision-makers to identify the projects which will facilitate strategic growth for a hydrogen economy.

The opportunity for Australia to be more competitive in this transitioning world and ultimately reap the long-term economic benefits for companies and communities of the hydrogen economy is there for the taking, so let’s move quickly.