With the closest referring facility 685 km away in Rockhampton, and the closest tertiary hospital 1 100 km away, Longreach Hospital is the central point for healthcare in the region, with women coming from as far afield as the Northern Territory border to give birth at the facility. It is also the region’s only medical imaging department, operating theatre, pathology and emergency department.

In 2017, work commenced on an AUD10 million upgrade of the over 70-year-old facility, which included the redevelopment of half the hospital, a full mechanical services upgrade and a new Aramac Primary Health Centre. Inherent challenges included the building’s age, design restrictions, the remote location, latent conditions and stakeholder engagement.

In January 2018, Aurecon was engaged by Queensland Health to reinvigorate the upgrade project through project management expertise focusing on governance and stakeholder engagement, programme and staging, and risk management.

Our ‘People Centred Care’ approach ensured the successful delivery of construction while maintaining clinical services to the region – one of Queensland Health’s primary objectives.

From fractured to fixed

At the outset, faced with project fatigue and strained communication between stakeholders, Aurecon’s initial priority was to re-establish the governance and effect a positive cultural change on the project and among key stakeholders. These included end users of Longreach, a contractor from Townsville, as well as a project director and design consultants from Brisbane.

Working closely with stakeholders, Aurecon developed a Stakeholder and Communications Management Plan and applied the processes and tools outlined in the plan to ensure the project achieved alignment of the stakeholders around a shared vision. The emphasis was to deliver informative, collaborative and no-surprise communication and consultation that left a positive legacy and relationships.

After three months dedicated to understanding the client’s and builder’s needs, our first step was to re-establish the project baseline with a collective understanding from key stakeholders on the project objective, current financial status and current delivery schedule.

At the time of Aurecon’s engagement, there was no integrated project programme incorporating the contractor’s construction schedule and the hospital’s transition and commissioning plan.

A Weekly Report was added to the reporting documentation to address feedback from stakeholders that the monthly reporting and meetings were not frequent enough to keep the hospital informed. The Weekly Report included upcoming key milestones, the planned/forecast staging schedule, change requests, site photos and current issues. This was a valuable way for the facility stakeholders to be kept up to date with the project. 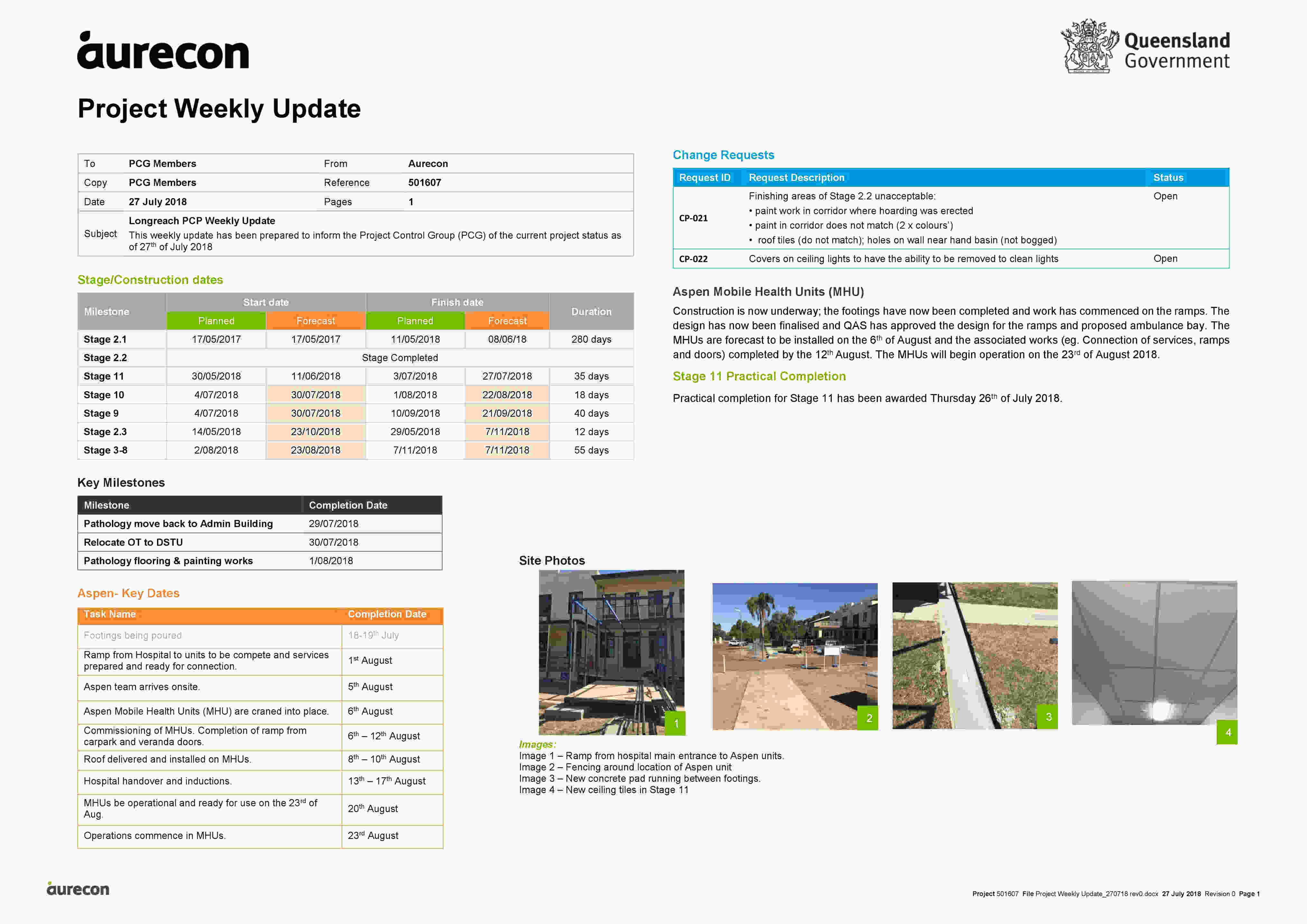 Aurecon understood the sensitivity involved in undertaking construction works in a live hospital environment, and the need for operational continuity as the single greatest risk to the success of this project.

Initially broken down into an 11-stage construction programme involving works occurring concurrently while the hospital remained operational, Aurecon designed an entire staging revision. This had a clear focus and fundamental understanding of the facility, as well as patient and staff requirements aligning with our ‘People Centred Care’ approach.

Given the major risks of the project, it was crucial the staging was co-designed with the Longreach Hospital facility staff and stakeholders, the building contractor and the client. A staging workshop was held with key stakeholder groups: clinical and operational hospital staff (users), project steering committee (executive) and project team (builder and designers). This resulted in a suitable restaging solution being developed, which accommodated all the requirements of the hospital to continue delivering their services, but still was realistic for implementation by the contractor.

Using a stakeholder-driven approach to scheduling, Aurecon, with the builder, could easily understand all the constraints and pinch points of each stage and schedule effectively. The project team had a ‘real’ understanding of the programme and what could or could not move in the event of a delay or issue.

Improving health outcomes for all

By taking ownership of risks and issues while fostering a culture that was vibrant, innovative and collaborative, Aurecon’s project management and stakeholder engagement programme was instrumental in reinvigorating this project. Aurecon’s engagement ultimately supported the delivery of an important healthcare outcome for the Central West Hospital and Health Service of Queensland, and for the rural communities that use the Longreach facility.

The project was recognised by Australian Institute of Project Management (AIPM) – National awards in the Community Service and\or Development category in 2019.