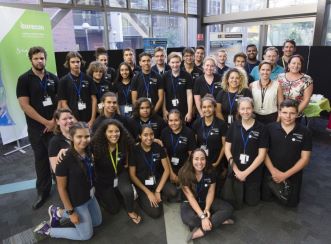 The Aurecon Perth and Sydney offices have partnered with Engineering Aid Australia to support the facilitation of Indigenous Engineering Summer Schools.  The Summer Schools, run by Curtin University in Perth and Sydney University, engage high school students in engineering as a potential career. A small but passionate group of staff in both offices volunteered their time to speak to students, network directly with them, as well as guide them through activities that demonstrate careers at Aurecon. Exceptional feedback has been received from students in both groups, along with a lot of interest in undertaking work experience with us. Aurecon looks forward to continuing to support greater racial diversity in the Australian engineering profession.

Mark Henaway, Aurecon Transport Associate, shared his career journey with the Sydney Summer School.  Mark was the first person of indigenous heritage in Australia to graduate with an electrical engineering degree, from QUT (Queensland University of Technology) in 1997.  Mark, along with Nial O'Brien, Technical Director Transport, Aaron Ramsden, Electrical Engineer, Alexandra Hunt, Structural Engineer, and Andreas Novianto, Electrical Engineer, networked with the students both at the Summer School, and at the Engineering Aid’s 20th Anniversary celebration event during the same week.

Participating student Douglas Anderson, from Wee Waa High School in NSW, thanked the Summer School supporters, saying how the Summer School really helped him understand more about the range of engineering careers available to him and how a career in engineering could really help make a positive difference for people in the future. He got to see and do so many things and meet some amazing people who inspired him.

In a company Yammer post, Raj Chhana, a project manager in our Perth office, shared his experience on the mentoring session he and some of his colleagues were lucky enough to host for 22 students and 6 student mentors.

Raj observed that, based on the enthusiasm shown by the students, the session was something the students very much saw as an opportunity to help give themselves the very best chance of succeeding in their chosen career pathway. And how it was particularly refreshing to see how all the students actively participated and enjoyed the experience that Aurecon provided them with. Hearing comments such as ‘we had a ball,’ ‘Aurecon is such a cool place,’ and ‘this is the best activity we’ve done,’ reminded Raj that we work in a very progressive organisation.

A stand out for all the students was the VR (visual reality) experience, and it was clear they were surprised engineers even used this sort of technology.

Reflecting on the experience Raj commented that as a group they learned that in their roles they have the opportunity to pass on their knowledge and experience to a younger generation and that the few hours spent with the students was certainly a fulfilling experience for them all.

Raj is participating in Aurecon’s Foundations of Leadership programme, for which he needs to complete a team project. The team made an on-going commitment to use their combined skills to help influence and potentially inspire the younger generation, with a focus on the Indigenous community. Raj hopes this is the first step in their journey.

Our blog: Just Imagine | Want to win the future? You’ll need VR to do it