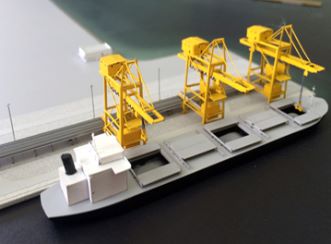 As an engineer, I am fortunate to be able to embed a more environment-friendly approach in my professional life — not just in our projects, but also in the process of delivering them. While working on the Bulk Materials Handling Systems (BMHS) project for Qatar Primary Materials Company (QPMC), I was driven by the thought that our small actions can make big differences.

As the groundwork for hosting the FIFA 2022 World Cup and its National Vision 2030 begins, Qatar must ensure a steady supply of stone aggregate (gabbro) being imported at the Port of Umm Sa’id (Mesaieed). Gabbro serves as a primary construction for concrete and asphalt that is instrumental for bringing Qatar’s aspirations to life.

Port operator QPMC was tasked to almost double its throughput of gabbro at Berths 2 & 3 from 16 to 30million tonnes per annum (Mtpa) to support Qatar’s construction activity. Aurecon was engaged to play a leading role in providing design, delivery, advisory, and asset management services to design solutions for the port.

Small, clever steps at a time

Expanding the port was a complex challenge – full of multiple moving parts. But we were not to be deterred from implementing sustainability measures on the project.

The conveyor system itself removes 2 000-2 500 truck movements a day from local roads, which inherently reduces dust emissions caused by truck movements on the dirt roads within the old stockyard area.

Controlling dust emissions was initially not on anyone’s radar when Aurecon was first engaged on the project. Qatar’s natural environment is very dusty; so dust in the air is something that is just accepted.

However, if only 0.1% of the aggregate cargos are lost as dust emissions that is 30,000t of additional dust in the air or 1 200 trucks every year. So controlling of dust emissions became a critical part of operations at the Port of Umm Sa’id because of the impact on the neighbouring industries and residents of Mesaieed.

Originally, the idea was to use water jet sprays to control dust. However, we thought that this was highly inappropriate in a desert climate where all potable water is generated by desalination. Secondly, daytime temperatures can average 42 degrees Celsius so water mists evaporate very, very quickly. To solve this, we recommended a more eco-friendly, sustainable solution of using dust filters at transfer points.

With this solution, we eliminated the use of precious and expensive water resources. The solution also ensured the health and safety of the port's neighbouring industries and residents. Our key dust mitigation measures were not only integrated into the project but have also set the dust control benchmark for Qatar.

Being eco-friendly made commercial sense as well.  Dust content of the gabbro imports, works out to be about 3%. However, 3% of 30Mtpa is almost a million tonne of material a year. So every particle of dust must be contained with the cargo and leave the terminal. This helped convince our client and the contractor of the value of our approach.

In addition to the dust collectors, other dust mitigation measures implemented on the project include:

By combining excellent management system and engineering practises, we have improved both the air quality standards and productivity of the port.

Even bigger and better picture

At the opening ceremony in December 2016, feedback from the delegation was that everyone was impressed with the lack of dust emissions when stacking the materials, especially the finer grades (0-5mm).

Recently when I was travelling within the port, I had a casual conversation with the security guard at the port gate and asked, “How’s the truck movements been like recently?” In response, he looked at me, smiled and simply said “What trucks? It’s very quiet now”. Those small gestures made me even more proud of what we have achieved in this project.

Driving around the port, there is a very noticeable improvement. Without the loading of trucks, dust emissions are significantly less and the roads are very much safer.

Knowing that workers at the port and the residents at the neighbouring industries and communities go on with their daily activities in a less dusty environment, I recognise the importance of the legacy that we create and leave behind. Through such small innovations, we make a big difference not just for our projects, but also for the environment and the communities in general too.