Caring for our beaches around the world 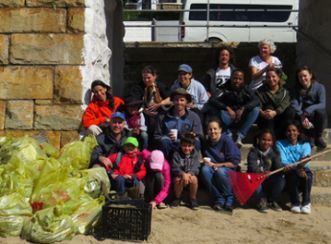 Aurecon took part in the 31st Ocean Conservancy International Coastal Cleanup day, which was held on 17 September 2016. Despite the cold weather staff came out to take part in the world's largest clean up event.Teams joined clean up initiatives at Melkbosstrand and Kalk Bay in the Western Cape and the East London staff joined the Buffalo City Metro clean up.

A team of over 70 volunteers (56 adults and 14 Children) collected over 500kg of rubbish. There were 24 Aurecon staff (with family and friends), supported by 46 community members that took part in the Kalk Bay Clean up. The most collected items were broken glass and cigarette butts. Each volunteer enjoyed coffee/hot chocolate and pastry courtesy of Olympia Bakery.

Aurecon folks at Melkbosstrand collected 5 bags of rubbish with a total weight of about 24kg. The weirdest thing that was collected at Melkbosstrand was a purple bra (it must have been some beach party). Grossest things – diapers. It was a great family outing.

In East London the event was honoured by various participants from IWMSA members, BCMM workers, Border Kei Chamber of Business members, Aurecon staff members, ADM staff members, Government EPWP workers, Aspire workers, Cokisa staff members, and community members at large. The wet weather allowed people to assemble back at the meeting point 2 hours later, with all the collected rubbish bags, where they were addressed by Ms Nota and the Portfolio Councillor of BCMM. A vote of thanks was given to participants for spending their Saturday morning for such a worthy cause at EL beachfront, making a difference to our environment.

Plastic products certainly make life easier; individually wrapped snacks, plastic bags to store sandwiches for lunch, soft drink bottles, disposable razors, nappies, shampoo bottles, and carry bags, to name a few. To humans, these are items of comfort, if not necessity, but to marine animals, they can be a floating minefield.

When plastic reaches our waters, it poses a threat to the animals that depend on the ocean for food. To a sea turtle, a floating plastic bag looks like a jellyfish. Plastic pellets - the small, hard pieces of plastic from which plastic products are made - look like fish eggs to seabirds. These plastic items are killing our marine life.

On Wednesday 22 March 2017, 19 Auckland Office Aurecon staff and 300+ primary school children, parents and teachers, teamed up with Sustainable Coastlines, and spent a morning cleaning up two West Coast beaches in Auckland, NZ. The aim was simple: to stop plastic making its way into the waterways. It was a great opportunity to give back to the communities in which we live, work and play.

Refuse, Reuse, Reduce, Recycle (and in that order). Say no to plastic and says yes to marine life.

Marine debris is choking our oceans, creating a devastating impact on marine ecosystems world-wide. The Australian coastline is where three of the world's great oceans meet: the Pacific, Indian and Southern Oceans.

Marine debris includes consumer items such as glass or plastic bottles, cans, bags, balloons, rubber, metal, fibreglass, cigarettes and other manufactured materials that end up in the ocean and along the coast. It also includes fishing gear such as line, ropes, hooks, buoys and other materials lost on or near land, or intentionally or unintentionally discarded at sea.

This debris is harmful to marine life and can have catastrophic and often fatal results.

It can cause injury or death through drowning, injury through entanglement and internal injuries, or starvation following ingestion.

Studies and analysis of marine debris conducted by the global scientific community are revealing its disturbing impacts with alarming results:

Sea Shepherd is joining with local communities all over Australia to run Operation Marine Debris to help address this problem. Two members of the Quality, Environment & Sustainability team joined the Marine Debris team and 85 other volunteers at Sutton’s Beach in Redcliffe, Australia one Sunday morning to clean up this beautiful part of the world.

In the space of only two hours, our group was responsible for collecting the following waste:

Every piece of rubbish collected from the beach and the surrounding picnic area can potentially save a marine animals life and make your next trip to the beach a little nicer. Please be aware of where your litter ends up. Take your rubbish home again with you after your next outdoor adventure. Better yet, swap disposable water bottles, straws, plastic bags and take away coffee cups for reusable, ecofriendly items. All the waste we make has to end up somewhere. Let’s minimise it wherever we can.

If you are interested in taking part in a beach clean-up near you, head to the Sea Shepherd website for details.