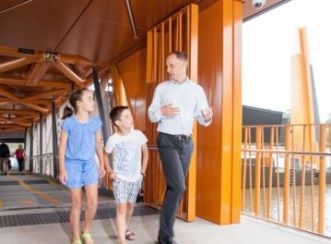 Arne Nilsen with his kids, Emily (11) and Paul (9), at the Brisbane Ferry Terminals

There is a saying here in Queensland, Australia: it’s beautiful one day, perfect the next.

But for some Brisbane residents, beauty turned to horror when the mighty Brisbane River broke its banks on 12 January 2011, inundating thousands of homes and livelihoods.

The flooded river peaked at 4.46 metres in Brisbane City at 3:00am on Thursday 13 January 2011, devastating critical transport infrastructure.

Our Queensland Premier declared a disaster, setting up evacuation centres and a major incident room to coordinate a rescue operation.

With transport routes cut off, displaced residents waited anxiously, unable to go and inspect the damage to their homes.

Protection against the paralysing effect of future floods was a primary focus of Brisbane City Council’s AUD 100 million upgrade programme for the Brisbane ferry terminal network.

The Commonwealth and Queensland Governments approved Natural Disaster Relief and Recovery Arrangements (NDRRA) funding for the ferry terminals replacement project as part of the city rebuild.

As the main waterway through Brisbane, the river is an integral part of life in the city.  After all, it’s why Brisbane is also affectionately known as the ‘River City’. With this in mind, we set out to deliver to the community a new generation of ferry terminals that took public transport infrastructure to a new level.

We challenged each other throughout the process, not only to solve the technical aspects of Brisbane City Council’s brief, but to push the limits of the possibilities across every single component.

These new generation terminals are a fine example of how architects and engineers are working together symbiotically to evolve building typologies beyond the mundane and into new territory.

We hope these terminals will become synonymous with Brisbane’s forward looking attitude to the design of public transport infrastructure and enhance commuters’ experience of and connection to the city’s key natural feature — its river.

While my nine year old son thinks the project could have used more orange paint, both he and my 11 year old daughter agree that the ferry terminals look much “cooler”. They are incredibly proud of the work their dad has done in delivering award-winning, critical infrastructure that might even outlast them.

Always conscious of our responsibility to design for future generations, I asked my children Emily, 11, and Paul, 9, what they thought of the new ferry terminals.

What is the best thing about the new ferry terminals?

Paul: They will not break in a flood.
Emily: They have really attractive colours and can survive floods.

Why do you think your dad’s team’s design won the design competition?

Paul: Their design is not able to break in floods and looks awesome.
Emily: The gangway is safe and can protect itself from floods.

How are the new ferry terminals different?

Paul: They are much more durable and look better.
Emily: These ferry terminals look a lot more cool.

If you were part of the design team what would you put in the ferry terminal?

Paul: I would put more orange paint, because I think more of the ferry terminal should be orange rather than grey.
Emily: I’d put three ferry landing places because it would be more efficient in getting people to places quicker.

Do you think the ferry terminals will be there forever — even if there is another flood?

Paul: Not forever, but for a very long time.
Emily: I think the ferry terminals will be there for at least another 80 years.

Critical transport infrastructure in Brisbane was devastated when the river flooded in January 2011. The Aurecon and Cox Architecture team was passionate about finding a better way to make this critical ferry infrastructure more flood resilient, accessible and for travellers to enjoy and celebrate the river.
These new generation ferry terminals stretch conventional boundaries.They incorporate world leading flood resilient technology which means the terminal can be returned to operation shortly after a flood event. A single sculpted pier allows commuters to enjoy panoramic views of the Brisbane River. It deflects debris away from the pontoon while also providing primary restraint of the pontoon. And upstream fender absorbs flood impact and deflects objects to prevent damage.
During a flood, the gangway uses the floodwaters to become buoyant and automatically detach from the shore; swinging behind the pontoon and out of the way of debris. The mooring point changes function to provide a supplementary lateral restraint to the pontoon. The downstream arm pivots below the water line. A chain connected to an underwater pile secures the downstream arm. The pontoon’s boat shaped hull makes it more resilient by minimising flood drag force. Believed to be a world first for compliant disabled access, the unique gangway mechanics maintain level intermediate landings throughout the tidal range. An innovative hanging floor within the gangway structure uses pinned parallelogram frames which can rotate and are connected to fixed triangular frames that maintain their installed level regardless of how the internal structure moves.
Now everyone is able to enjoy the iconic Brisbane Ferry Terminals and commuters and the city will benefit from resilient terminals that can quickly return to use after a flood.