Beyond designing infrastructure: A road to upliftment 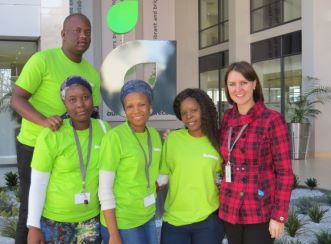 The primary objective of the Ga-Seleka roads upgrade project is to provide access for the 14 villages located along these two roads and thereby improve the economic and social status of the communities. This project was a public-private venture – first of its kind – undertaken by the Roads Agency Limpopo (RAL) and Exxaro Grootgeluk mine to design and construct two roads situated approximately 45 kilometres north of Lephalale town.

Jobs for the community

Close partnership between Aurecon, RAL, Exxaro and the project’s most significant stakeholder, Lephalale Local Municipality (LLM), throughout the design and construction phases has been evident.

Another outcome of this close partnership with client and stakeholders is the identification of SMME’s in the immediate area who will work closely with the Contractors during the construction phase. The Contractors have undertaken to upskill the SMMEs where possible.

It was very heart warming and inspiring for me that we had a vision for this project and turned it into reality. We could create so many benefits by working closely with the communities, getting them to participate and go together through this journey. My proudest moment was when we on-boarded 10 professionals from the community. We gave them the opportunity to work with us and our partners for 6 weeks, so they could gain valuable experience working in a corporate engineering field. It is often difficult for young and emerging professionals to get valuable work experience which will enhance their chances on the job market.  We can see now that these professionals are being absorbed into the job market, so we made a real and positive difference to their lives.

During the design phase, Aurecon’s design team decided to make their own contribution to the project and initiated a ‘clothes to trees’ exchange initiative. This initiative involved two social enterprises namely, Clothes to Cash Exchange (C2CX) and Food & Trees for Africa (FTFA).

These clothes were then handed over to C2CX, who use the clothes to empower those less privileged than us by creating jobs for people (including people with disabilities) to sort and bale the clothing, and by helping budding entrepreneurs to sell the clothing on in their own communities or up-cycle unusable clothes by making items such as pencil cases.

C2CX then donates Rand 5.00 per usable kilogram of clothes collected by Aurecon and donates it to FTFA, who in turn buy indigenous fruit trees that will be planted along the two Ga-Seleka roads. The trees will contribute to food security in the area, provide economic opportunities for those wishing to harvest the fruit and other substances of medicinal value, and importantly, will provide much needed greening and beautification within the villages and along the roads.

The beneficence of such a project adds significant sustainable value for the community in the long-term and has proven that it has the potential to pave the way for opportunities to evolve for the foreseeable future.

I am also excited that we have entered partnerships with several schools to plant trees there. The trees will be planted on 6 March 2017 – so watch this space.