The bees of the Canberra office 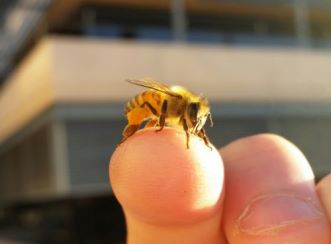 Bees are absolutely essential in food production.  That’s why they are what we call a keystone species in the environment.

After all, pollination is behind many of the foods that make our lives interesting, including strawberries, apples and nuts.

One of the things that people don’t always realise is that lush urban settings can provide the ideal setting for honey production.

In what is probably one of the more unusual sustainability initiatives in Aurecon, we began keeping bees in the Canberra office in 2013.

The bee hives are kept on the first floor balcony at the office, with the bees not only pollinating nearby plants but also delivering honey. Our Aurecon branded honey, which we often give to clients as gifts, has even won an award.

We did a lot of research to determine how we could keep bees in a safe and effective way.

Admittedly, Aurecon Office Manager Mike Palmer was a bit cautious when I suggested we put beehives on the office balcony. He made me jump through a few hoops to make sure we covered all our bases with regards to health and safety before signing off on the initiative.  Now, we have received full support of management and they are pleased to see so many staff members highly engaged in the process.

I’m delighted at the level of fascination my colleagues show during the process of crushing honeycomb and extracting and pouring the honey. Hive inspections are photographed and articles are frequently posted on Aurecon’s intranet to keep everyone updated about the project. Some staff have been lucky enough to don the bee suit during inspections, which is something that people don’t generally get to do in their day-to-day lives.

Being able to experience the bee keeping and honey extraction processes first hand has been a lot of fun for many of us. Executives, managers and various members of our business units have been involved in doing the beehive inspections and many staff members lend a helping hand to extract and bottle the honey.

Keeping bees in the office has proven to be extremely successful and very rewarding. Many of our staff members have become interested in bees as a result of the project.  One staff member even commented to me that he was now known as ‘the bee expert’ among his friends!

The marketing team at Aurecon noticed the pages on Aurecon’s website that received the highest amount of visitors were articles relating to our bee keeping project and our indigenous reconciliation journey.

In 2014, we brainstormed how we could bring the two closer together.  The result was the uniquely painted Warré Beehive.

The beehive is based on a sustainable beehive design, which incorporates open-style frames. I constructed the base of the beehive, while the artwork shows a warm, multi-coloured sun turning into the roots and branches of a Yellow Box tree.

Krystal explained that the sun pattern represents the female spirit of the sun and the rays of the sun go down and become the roots of the Yellow Box tree that feed the hive.

Aurecon has recently introduced the Flowhive at the office. While it’s a standard hive in many ways, there is something that makes this particular hive innovative and unique.

The Flowhive modifies the hive’s super box, which is where the honey is stored, and it allows us to extract the honey without opening the hive and disturbing the bees. Aurecon was involved in the original Kickstarter crowd-funding support project for the Flowhive and as a result Aurecon put together one of the first Flowhives in the world.

We’re going to try it, see how it works and provide feedback to the inventors.

The project has significantly changed the way staff at the Canberra office think about bees and their role in the ecosystem. I spoke to a few of my colleagues to find out how they got involved and if the hive had changed their perception of bees.

How are you involved in the bee project?

“I often take photographs of the hive inspections. I also get involved in the crushing of the honeycomb, the extraction process and the pouring of the honey, which has been absolutely fascinating.” — Karyn Tisdell, Team Assistant

“I started working at Aurecon on 1 April and when I was given a jar of Aurecon honey, I didn’t know whether it was an April Fool’s joke or not! I like to brew beer in my free time and I used the honey to make honey beer. It’s great to be able to use a local product to improve my beer.” — Sam Butler, Client Side Project Manager, Defence

How has the project changed the way you think about bees?

“The bee project has changed the way I think about bees quite drastically. I used to have a huge fear of insects, so when Cormac suggested we put bees on the balcony I was very opposed to the idea. Images of bees swarming the office and attacking people were conjured up in my mind. The more I learned about bees and their role in the ecosystem, however, the more I learned to appreciate them. Cormac is so passionate about the subject and his passion is contagious.” — Karyn Tisdell, Senior Administration Assistant, Program Advisory

“This initiative has taught me a lot about bees. I didn’t know much to begin with, but sitting next to Cormac at the office has taught me myriad of things. It’s been a real eye opening experience and I’m now considered a bee expert among my friends. I’ve visited the beehive on several occasions and I’ve even worn the bee suit.” — Sam Butler, Client Side Project Manager, Defence

“I’ve learned that a lot of what we eat is only possible because of bees. I didn’t know that before we started our project. We’ve given both local and national clients jars of Aurecon honey and it’s always very well received. Clients love the unusual nature of the gift.” — Mike Palmer, Aurecon Office Manager