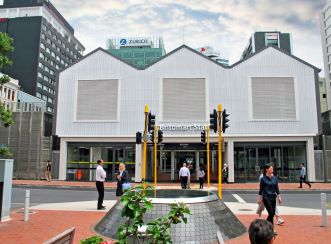 Aurecon has been engaged by Auckland Transport since 2012 to provide technical services for the Auckland City Rail Link (CRL) project. This will be New Zealand’s first underground passenger railway which requires a step change in safety assurance. In addition, the client has a specific policy to achieve high standards of sustainability for the lifetime of the project.

I am a Kiwi who spent 17 years overseas working on major passenger rail projects. I have the good fortune to return to New Zealand and work on the Auckland CRL – a major metro project in my hometown. I am passionate about sustainable transport and hopefully my contribution to this city shaping project will help many Aucklanders to reduce their dependency on cars to get around the city. (Grant Daniel)

Below is a summary of the work undertaken together so far on one of New Zealand's largest projects.

Safety assurance for the project is managed under three management plans:

A series of hazard identification workshops and risk assessments were undertaken by Aurecon with key project stakeholders including the client, KiwiRail and the New Zealand Fire Service. The hazards and identified risk control measures were recorded in a comprehensive hazard log which was then used as a tool to track actions required by the design team and client to implement the various risk control measures.

Risks are being actively managed during the design to eliminate or reduce them so far as is reasonably practicable. Fire on a train in the underground environment was identified as a significant risk in the operations phase. A specific, detailed fire engineering risk assessment was undertaken to verify the sufficiency of the design measures to control this risk, which include:

Auckland Transport has implemented the Infrastructure Sustainability Council of Australia’s IS rating tool, adapted for New Zealand conditions, to measure the achievement of the CRL project’s sustainability objectives.

Aurecon worked collaboratively with the client and its contractor, Connectus (a joint venture of McConnell Dowell and Hawkins), to achieve a ‘leading’ rating for the Albert Street tunnels and a storm water diversion. The IS rating tool will continue to be used for the project’s main works which are planned to be procured in 2017.

It has been an amazing opportunity for Aurecon staff to work on this prestigious project and work together with Auckland Transport to deliver sustainable outcomes. (Christian Mapes)

To find out more about Auckland Transport’s sustainability initiatives on the project, visit the official website https://at.govt.nz/projects-roadworks/city-rail-link/sustainability/