For Aurecon’s Paul Godden, the team’s success marks how the company continues to play a key role as an engineer and advisor across Australia’s energy sector, including designing a number of industry-defining renewable ‘firsts’ for clients

The leading-edge, 5 MW system is one of the largest grid-connected storage solutions in Australia. The facility is an important step in ensuring reliability in a controlled transition to renewable energy for the Northern Territory.

“Reliability and stability of the power system is a critical barrier in the uptake of renewable energy across Australia, and I am pleased that we are at the forefront of tackling this issue right here in Alice Springs.

“The cutting-edge technology in our Battery Energy Storage System will reinforce Alice Springs as the solar capital of Australia by enabling greater solar penetration whilst maintaining grid stability.”

The battery provides a near-instantaneous response to variation in solar load, particularly during cloud cover, and will improve power generation reliability for the region by helping to smooth the output of solar power.

The system has a 5 MW capacity, combined with a half an hour storage capability, and it is capable of flexing to 8 MW for six seconds and 7.5 MW for 60 seconds.

The battery underwent off-grid testing and online commissioning in 2018, and was showcased to industry professionals on Friday 9 November 2018. The system was supplied and installed by Vector Energy. 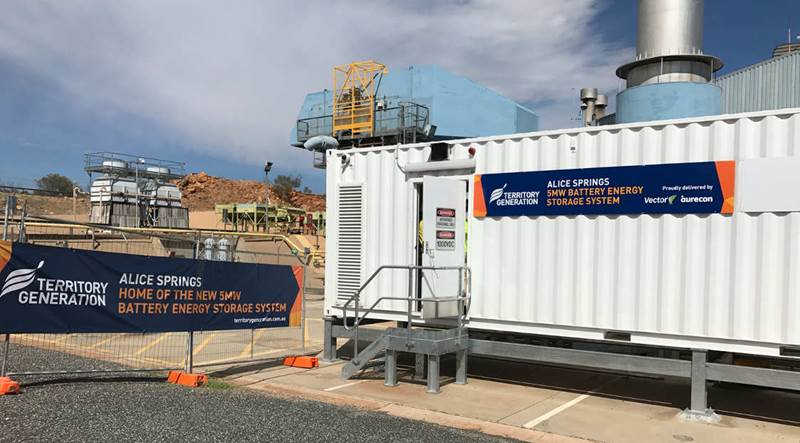 The project was completed safely and on budget, and modelling has determined that the cost of the battery system is expected to be recouped within four to five years due to efficiencies and savings.

“Aurecon continues to play a key role as an engineer and advisor across Australia’s energy sector, including designing a number of industry-defining renewable ‘firsts’ for clients,” said Aurecon’s Paul Godden, Technical Director, Energy.

“Our success with this project had led to a range of other appointments in the clean energy sector, including supporting Territory Generation with its new 45 MW battery project in Darwin and our recent engagement as the specialist and technical engineering advisor to the Government of South Australia for the 100 MW Tesla battery at the Hornsdale Power Reserve,” added Godden.

Aurecon has appointed Doug Tapper as a Technical Director – Energy, to lead the company's energy business in Western Australia.