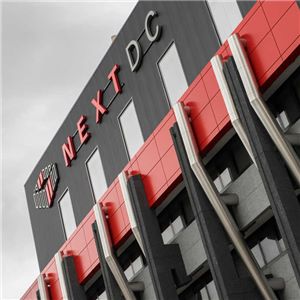 20 December 2018 – NEXTDC Engineering and partner Aurecon received the prestigious accolade of the Design Team of the Year at this year’s Data Center Dynamics (DCD) Global Awards.

Since start-up in 2010, NEXTDC’s mission has been bold: to design and deliver the most reliable, energy efficient and innovative industry leading co-location data centres, firstly in the Asia Pacific and then globally.

To date, Aurecon has delivered services in support of NEXTDC’s mission which included site acquisition, building and structural engineering design, environmental, surveying and acoustics to the NEXTDC B2 Brisbane Data Centre, and the NEXTDC M2 Melbourne Data Centre.

"We set out from the start to build the best design team and the best data centres in the industry. The great result was only achieved due to the collaborative efforts from all the engineers and architects working together from NEXTDC Engineering, Aurecon and Greenbox," says Van Zetten.

Representing the next generation of data centre design in Australia, NEXTDC’s B2 and M2 Data Centres mark Australia’s first data centres with Uptime Institute Tier IV Certification for Constructed Facility. The independent auditors and inspectors of the globally respected Uptime Institute methodically scrutinised every aspect and component of each design, including the architectural compartmentalisation to ensure no single component failure can result in a mission critical system outage.

"The NEXTDC B2 and M2 data centres have a game-changing impact on the industry," Gurr said. "Data centre outages in the digital age can be catastrophic for businesses and lives with many critical services, such as hospitals and transport dependent on their reliable operation.

"Through the delivery of dependable and sustainable data centres, NEXTDC, in collaboration with Aurecon, is designing and building the critical infrastructure for posterity and setting an example for the rest of the industry to follow."

"When we think about the potentially devastating impact that a critical system outage can have on businesses and lives, we feel a sense of moral obligation to design and deliver the most reliable and sustainable data centres we possibly can, always having our children and future generations in mind," Van Zetten added.

Simon McFadden and Phil Motteram joins Aurecon's Data and Telecommunications team to help strengthen the company's ability to assist clients in this sector.