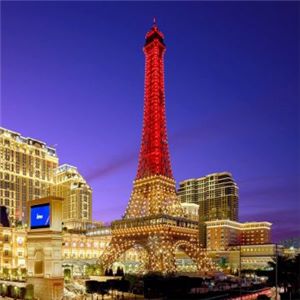 30 October 2015 - A replica of one of the world’s most recognisable structures now stands in the midst of Macau’s busy centre as construction of a recreation of the Eiffel Tower is completed with the topping out ceremony on 15 October 2015.

The tower will form part of The Parisian Macao, an integrated resort, which is currently under development by Sands China Ltd., a subsidiary of resorts giant Las Vegas Sands Corp. The Macau Eiffel Tower, which is half the scale of the original, is a faithful replica of the famed 19th century counterpart in Paris.

Global engineering consultants Aurecon was closely involved in the planning and design for the distinctive new structure. The company provided full structural engineering consultancy on the job, and helped manage the difficulties of maintaining an authentic design while addressing the challenges caused by extreme weather, a congested construction site, and the anticipated high number of visitors.

At the project’s outset, Aurecon provided the drafting of the tower using Revit software, which allowed the team to visually represent the complicated design connections in 3D. This made it easier to detect any potential challenges or clashes that might arise during construction even before building work had begun. As a result, this ensured time-consuming amendments at the shop drawing preparation or fabrication stage were avoided.

“The key to recreating this iconic landmark has been strong team work and the close collaboration between the design and construction teams,” says Dr Alecs Chong, Aurecon’s project leader on the Macau Eiffel Tower.

Dr Chong says the close co-operation between the design and construction teams started at the earliest stages of the project, and has delivered efficiency improvements from the beginning.

“The original structural performance criteria for this project were specified at an early stage and were largely based on the criteria commonly used for conventional office or residential buildings,” he explains. “However, given that the tower behaves as a slender, open-lattice structure, some of the serviceability performance criteria were too conservative and after consultation with stakeholders, these were subsequently relaxed. So, clear communication between the design and construction teams, supported with sound technical evidence, delivered an outcome that would allow the design team maximum flexibility.”

Among the biggest challenges for the design team was addressing the issue of typhoons, which occur seasonally in Macau. In particular, the design team had to ensure it made the correct critical wind loading calculations for the tower in the event of a direct hit from a typhoon.

“We used the Equivalent Static Wind Loads (ESWL) approach developed for towers to determine the critical wind loads,” says Dr Chong. “We also ran a series of studies to investigate the wind-induced dynamic response at the tower’s top peak at various wind speeds. And we then looked at the subsequent impact on human comfort in terms of potential vibrations. Our thorough investigations and scenario planning allowed the project team to ensure not only an aesthetically pleasing and accurate design, but also a safe one.”

A further challenge for the design team was accounting for the very high number of visitors the attraction is likely to draw. In particular, says Dr Chong, they focused on the footbridge that will connect the tower with an adjacent casino complex.

“After discussions with the developer we knew that anticipated visitor traffic on the footbridge would be high as it is the main access point between the hotel complex and the tower,” he explains. “As a result, we adopted an acceleration-based vibration assessment method to review the bridge’s design taking into account the loading caused by crowd walking. We used superposition to look at responses caused by various vibration modes to get to an overall vibration response, which we then established was within acceptable human comfort levels.”

Materials and equipment – on-site challenges at the Macau Eiffel Tower

Outside of the challenges directly linked to the tower’s design, Aurecon and its partners also had to contend with some more practical difficulties related to the construction work. Specifically, how to get the large steel sections needed for the tower’s construction to the job site and, once there, how to assemble them.

“The port of Macau is neither large enough nor deep enough for the vessels that would normally deliver the oversized steel sections needed,” says Dr Chong. “As a result, the job had to request shallow-hulled vessels, but this limited delivery capacity. This, in turn, meant we had to plan the size of the delivery racks, to maximise delivery capacity and minimise delivery costs, which were estimated as being anything up to a quarter of the overall material cost.”

And on the job site itself, there was a challenge presented by the selection of the tower crane needed to place the steel and other building materials, as Dr Chong explains.

“On a traditional concrete building the tower crane is attached to the construction as it climbs, offering lateral rigidity so the crane can be raised higher and higher,” he says. “But because the replica Eiffel Tower is such a slender structure, the support for a regular tower crane is not there. The tower crane selection was therefore a complicated process that required full collaboration between the construction manager, the design engineer and the tower crane manufacturer because we had to select a crane and configuration that would avoid large lateral loads being transferred to the tower.”

The solution came in the form of a luffing jib crane, which can articulate its jib between the horizontal and near vertical angles. Using such a crane, and fitting it with a shorter jib, meant less of the lifting force was distributed laterally and more was directed down the crane’s mast. With a maximum hoisting capacity of 28 tons, the crane facilitated the modular construction method on site, overseeing the fast and safe installation of building elements.

Overall, says Dr Chong, being involved on the recreation of the Eiffel Tower on the Parisian Macao Integrated Resort has been a hugely challenging yet rewarding venture for the team at Aurecon.

“Recreating the Eiffel Tower using modern steel construction technology is vastly different from working with the wrought-iron that features on the original,” he says. “Extensive consideration had to be paid to disguising the modern steel construction while at the same time, achieving a cast-iron lattice appearance. It’s been immensely satisfying to see this truly inspired structure come to fruition. And it’s been rewarding to see how the extensive use of advanced techniques such as finite element analysis, 3D drafting and shop drawing preparation have delivered successful solutions for the design, fabrication and erection of the complex lattice geometry on this project.”

Creating a landmark and delivering a view

Standing next to another distinguishable Sands development, The Venetian Macao, the replica Eiffel Tower at the Parisian Macao  is set to become both a landmark feature and a popular outlook, offering guests and visitors alike spectacular views of Macau’s bustling Cotai Strip.

The tower is half the size of the original and retains many decorative features of its Paris cousin, including cornice scrolls, balustrades, gussets plates, lattices, staircases and mesh screens around the observation decks.