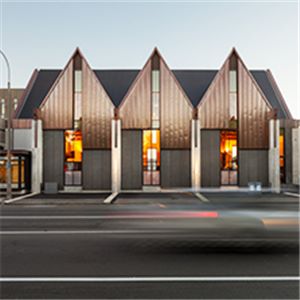 A number of other winning projects also featured work completed by Aurecon, including the Clyde Quay Wharf in Wellington, which took out the Supreme Award.

Built on a wharf that has been operating since 1907, the Clyde Quay Wharf is a premium residential development in the heart of Wellington’s waterfront. The extensive 292 metre-long development includes 76 luxury apartments, a business centre, boutique fitness centre and a 16-seat movie theatre, as well as Australasia’s first of its kind under wharf basement carpark.

Matthew Paget, Aurecon’s Senior Facade Engineer said, “The project features many environmentally sustainable design features, including an efficient building envelope with high levels of thermal insulation and high performance double glazed window and door systems. The challenge of environmental exposure of the various facade elements was addressed through specific material durability and compatibility studies to ensure the selected materials were fit for purpose.”

Originally built in 1939, 15 Stout Street is one of New Zealand’s first welded steel framed buildings and one of Wellington’s most iconic buildings. Aurecon’s commission was to assess the building’s seismic capacity; however, the heritage status of the building and minimising disruption to the useable space, limited practical solutions of seismic strengthening schemes.

Aurecon, in conjunction with McKee Fehl, performed a series of full scale load tests where selected beams were isolated and then jacked cyclically using hydraulic rams in order to determine the joints’ true moment/rotation characteristics. This understanding led to considerable time and cost savings when compared to previously considered retrofitting options.

Tony Holden, Aurecon’s Lead Structural Engineer for this project, is delighted with the win and said, “This is the first time such testing has been attempted outside specifically dedicated labs in New Zealand. The success of this project offers building owners new options regarding seismic assessments and strengthening.”

The historic building suffered severe damage to its brick exterior in the 2011 February earthquake, leaving the timber roof structure in a precarious state but still standing.

Rangi Ruru Girls’ School was awarded Excellence for stage one of its major campus redevelopment post-earthquake which consisted of a new Science Centre, Gibson Centre (library) and General Academic Block named Mana Wahine. Aurecon’s Christchurch Building Services team worked collaboratively with the architect, client and builder to incorporate, wherever possible, passive design solutions to the buildings with the common goal of creating buildings that can live and breathe. The school is thrilled with the result.

Commenting on the outcome of the awards, Simon Taylor, Christchurch Buildings Manager, said, “The evening was a great turnout for Aurecon with the overall success rate of our building projects showing that we are continuously achieving our goal of producing high calibre and innovative work for our clients.”