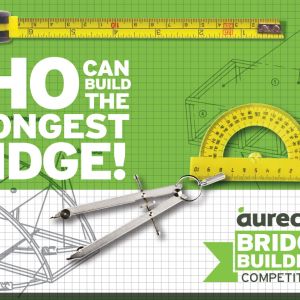 26 February 2013 - The Aurecon Bridge Building Competition for 2013 has been launched today, complete with a brand new website making it easier for teachers to register their schools, and for students to obtain the information they require to build the best bridge possible!

The Aurecon Bridge Building Competition invites school students from years 8 and 9 (years 9 and 10 in New Zealand) to compete in teams of three at 10 different locations across Australia and New Zealand by building their own bridges from a set amount of balsa wood, string, glue and cardboard.

The bridges are then put to the test on competition day using a specially built rig to see which school’s bridge can withstand the heaviest load before failing. Guest judges will also score the bridges on aesthetics, creativity and workmanship. Competition in 2013 is taking place in the first week of August.

Standards were set high in 2012, with an astonishing international record being set by the team from St Patrick’s College in Sydney’s inner-west. Their bridge withstood an incredible 202kg - can they be beaten this year?

Participation is free, and prizes are awarded to schools and students in each location for first, second and third place, along with a prize for the overall competition winner.

Bill Cox, Aurecon’s General Manager for Australia and New Zealand, said: “The aim of the Aurecon Bridge Building Competition is to provide insight into engineering as a career choice for students, and to provide a fun and challenging environment for students to put their skills in teamwork, creative thinking and innovation to use.”

Competitions in 2013 will be held in the following locations: