Aurecon is recognised for a seismic world first 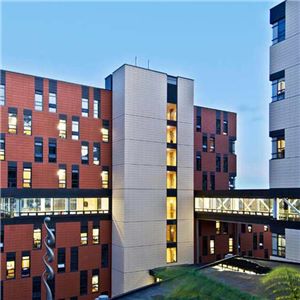 Aurecon New Zealand’s Wellington team has been named the winner of a prestigious international award which recognises excellence in structural engineering.  The Institution of Structural Engineers (UK) has announced Aurecon as the winner of the Education or Healthcare Structure category for the 2009 Structural Awards.

The award was given for the Te Puni Village, student accommodation buildings in Wellington.

Aurecon developed a world first, cost-effective system for damage avoidance applicable to steel framed buildings to ensure they remain operational after an earthquake.

Aurecon was engaged by Victoria University of Wellington to provide structural, geotechnical, building services and civil design for the new student accommodation buildings at Fairlie Terrace. This was an incredibly complex project which required innovation and development of new technologies and was delivered on time and within budget.

The system works by allowing the building to lift off the ground and rock, using railway damper technology to control movement.  The joints between beams and columns are allowed to slide absorbing seismic energy. The judges said “A worthy project bringing true innovation in the field of seismic design and economy to what could otherwise have been a very expensive building.”

Established in 1968, the Structural Awards recognise and reward the work of the world’s most talented structural designers and showcases projects that lead the industry's development. The Structural Awards 2009 took place on Friday 9 October 2009 at the Natural History Museum in London where over 100 projects were nominated across 11 different categories, with 41 shortlisted to win an award.

The Aurecon Te Puni Village was also shortlisted in the Community or Residential Structures category. Sean Gledhill, and Geoff Sidwell of Aurecon’s Structural Team in Wellington led the team on this project.

Neil Barr, Regional Manager of Aurecon New Zealand, said “This design ”first” demonstrates Aurecon’s innovative culture, which actively encourages our professionals to seek creative solutions for our clients’ projects.  This system is a highly cost-effective, sustainable and original solution with applications for all developers in seismic areas.  I would like to congratulate Sean and Geoff on an outstanding job.”

At the 2009 New Zealand Property Council Awards, Aurecon were winners in the categories of Special purpose and Education and Arts.