Uganda’s largest and most advanced brewery under construction 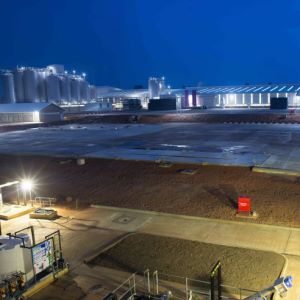 02 March 2012 - Nile Breweries (NBL), a subsidiary of the SABMiller Group, is Uganda’s largest brewer. The company employs an admirable blend of traditional brewing skills, combined with modern technological advances to produce products which are of an international quality and consistency.

NBL recently appointed Aurecon as the civil and structural consultant for the new greenfields brewery to be constructed in Mbarara, south western Uganda. This will SABMiller’s latest brewery and also the most advanced brewery in the country.

NBL’s project division, Capital Projects, are intent on constructing the brewery to international standards and world norms in terms of efficient, cost effective design and reduced construction time due to implementing lessons learnt on previous NBL projects, and are especially determined to optimise ‘cost spent per hectolitre’.

To achieve these requirements, Aurecon’s design team has been working in close conjunction with Krones AG, process designers on the project. The design optimisation process started at project inception with the establishment of an integrated site layout that has since been used as a model for other breweries.

“After investigating potential brewery sites in Mbarara late last year, Aurecon begun conceptual planning for the site which involved the integration of a vast multitude of facilities, including a bulk malt and sorghum road intake and storage facility, silos for malt/sorghum storage, brewhouse and beer process area, as well as a warehouse and packaging hall, to achieve an efficient and economic layout,” comments Aurecon’s Project Manager, Craig Wood.

The final layout centres around a common axis, which accommodates the product flow lines and links all the principal process areas. “This layout enables future expansion of all the main process areas, access between which is provided by service corridors/pipe spines,” explains Wood. What’s more, a revolutionary central mezzanine level used in previous projects will house the control rooms, electrical distribution rooms and offices that provide immediate pedestrian access to all key process areas. This mezzanine level will extend along the primary axis to the packaging hall, while the design allows for an additional hall to be constructed, should one be needed in future, with minimum interference to existing operations. A single site access point will permit the tight control of distribution and process-oriented raw materials bulk delivery vehicles, all of which will pass over a weighbridge.”

“NBL also had additional, strict requirements with regard to the design of the brewery’s external environment and industrial emissions,” says Wood.

Positioned on the banks of the Rwizi river, NBL have insisted that once constructed, the plant be visually tidy, soft on the eyes and that it set a precedent for the future development in the Mbarara area. To satisfy the client’s requirements, the design limits building heights where possible and a uniform, continuous building was specified, thus allowing the minimisation of external and ancillary buildings.

In addition, NBL are required to meet the SABMiller global standards, including effluent treatment and providing the necessary infrastructure for containment of the different waste streams. Having subsequently been appointed for full EPCM (Engineering, Procurement and Construction Management) services, Aurecon will be directly involved in designing this system and in determining the requirements as laid out by the local authorities on the treatment and handling of these.

“Throughout the design phase, the key objective was a design which would allow NBL to construct the brewery economically and to strict quality standards. Once complete, the NBL Mbarara brewery will be able to hold its own with any brewery in the world,” comments Wood.

“It will be one of the finest breweries in East Africa and Aurecon is convinced it will maintain the fine NBL brewing tradition,” he concludes.