Aurecon excels at the 2011 CESA Awards 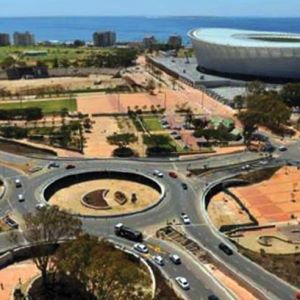 Held at the Vodadome in Midrand, Johannesburg, this year’s awards were described by CESA as a celebration of innovation, quality, outstanding workmanship and professionalism in industry and saw Aurecon walk away with no less than two coveted accolades:

Aurecon was appointed for the design and construction supervision of the Granger Bay Boulevard and Green Point Roundabout, which provide access for vehicles and pedestrians to the Cape Town Waterfront and which, last year, provided much-needed improved access to the new Green Point Stadium during the 2010 FIFA World Cup™.

The project formed part of the Department of Transport’s 2010 transport action plan which had two main aims: to get soccer fans from the airport into the city by public transport, and to maximise the use of non-motorised transport such as pedestrian movement and cycling. Consisting of an elevated traffic circle with a pedestrian plaza underneath, the Granger Bay Boulevard and Green Point Roundabout were pivotal steps towards achieving these aims.

“Aurecon is proud to have played a part in ensuring the safety of soccer fans during the 2010 FIFA World Cup™,” comments Aurecon design project manager Noel Petersen. “More important, however, is that fact that our commendation signifies an infrastructural improvement that will continue to have a positive impact on the City of Cape Town in years to come.”

Mpho is a key member of Aurecon's Cape Town office's Water Unit, and works in the wastewater field, with special focus on the optimisation of wastewater treatment facilities.

Apart from his exceptional technical talent, Mpho’s extra-curricular activities add to his stature as a young engineer bent on using his engineering talent to make a positive difference in the lives of those around him. His commitment to the betterment of others was displayed in his taking two weeks of leave to tutor matric mathematics and science at his high school in rural Polokwane.

According to Albert Geldenhuys, Aurecon’s Managing Director, South Africa, Mpho's award is particularly impressive, amongst a strong pool of young engineering talent. What's more, it follows on Aurecon being named the overall winner in the Mentoring Company of the Year category last year. “A key benefit of our mentoring programme is that it assists us to attract and build into staff who are passionate about their careers. Mpho's award is encouraging in that it is recognition that our strategy is working,” says Geldenhuys.

As part of this award, Mpho will have the opportunity to attend the International Federation of Consulting Engineers' Convention in Tunisia from 18 to 22 September 2011 and will serve on CESA’s Young Professionals Forum (YPF) for the coming year.

For more information on this year’s CESA awards, visit: www.cesa.co.za.

Aurecon’s office building in Century City, Cape Town, was recently completed and is the first building in South Africa to be awarded a 5 Star Green Star SA – Office Design v1 rating by the Green Building Council of South Africa (GBCSA).

This year, the overall winner in the green developments category was Nedbank Phase II, which is owned and developed by Nedbank Limited, and was designed by Grosskopff Lombart Huyberechts & Associates Architects. Aurecon fulfilled the role of mechanical engineer on the project.