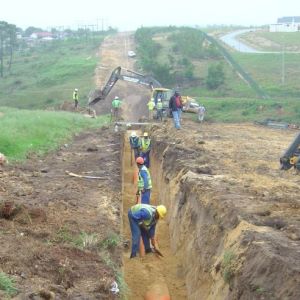 18 November 2010 – Every two years, the Institute of Municipal Engineering of Southern Africa (IMESA) invites local, provincial and government/semi-government authorities and/or their engineering consultants to submit entries for the IMESA Biennial Project Excellence Awards.

Entries are required to demonstrate ‘the art and science of infrastructure engineering to the general public and indicate how the profession finds answers to challenges’.

This year, Aurecon and SSI Consulting and Environmental Engineers’ project, titled ‘Emergency re-use of treated effluent for the George Municipality’, won the award for the best Community Upliftment project in South Africa.

A key criterion for this category was the project’s response to community needs. “Because the project helped secure a sustainable and safe water supply for the citizens of the George Municipality, it was a perfect candidate,” comments Aurecon Water Sector Leader, Professor Andre Görgens.

George has a historical annual average rainfall of 712.3 mm, but only received an average of 375 mm in 2009, plunging the area into severe drought. This prompted the City of George to take a decision to implement a scheme for the indirect re-use of treated effluent. This scheme, which forms part of the Municipality’s Raw Water Augmentation Plan drawn up in 2005 by Aurecon, will ensure a sustainable supply of raw water to meet potable water demands within the George Municipal area.

Aurecon and SSI were appointed by the George Municipality to undertake the necessary design, formulation of tender documents for the construction phase and overall monitoring of the construction works for the indirect re-use of treated effluent scheme.

Initially, the project will add 10 Ml/d to the Garden Route Dam. Later, this can potentially be expanded to 35 Ml/d by incorporating a further 10 Ml per day of effluent from the Gwaiing Wastewater Treatment Works (WWTW) and an additional 15 Ml effluent per day from the future upgrading of the Outeniqua WWTW.

“From a resource perspective, the indirect re-use of treated effluent is not only environmentally sustainable, but economically sustainable as well, as water that has already been collected from natural raw water resources can be re-used, without the need to develop new natural resources. Water can be continually recycled safely and blended with the new natural raw water to reduce the demand on the other natural water resources,” explains Professor Görgens.

He goes on to conclude that it is projects such as these that demonstrate the engineering profession’s ability to solve the most pressing challenges that today’s communities face.

Aurecon is a winner at the 2010 SAISC Steel Awards

Aurecon won a coveted award in the Architectural Category for the Freedom Park Museum, situated on the Salvokop Hill in Tshwane, as well as a commendation in the same category for the Nike Football Training Centre in Klipspruit, Soweto.

This year, Aurecon scooped a coveted award, together with an accolade, for two of its projects. Cunene River Bridge in Xangongo, Angola, won the award for The Most Outstanding Civil Engineering Achievement in the International Projects Category, while the Gautrain Viaduct V5C in Centurion was Highly Commended in the Technical Excellence Category of the Most Outstanding Civil Engineering Achievement.