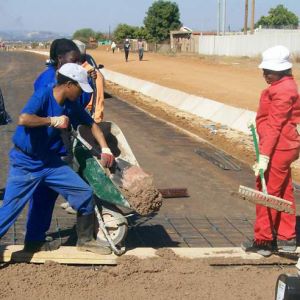 16 October 2009 – The Ultra-Thin Reinforced Concrete Pavement (UTRCP) project in Soshanguve has won the National Award for Community-Based Projects at the SAICE Project Awards for Civil Engineering Excellence, which took place on Thursday 15 October 2009.

The project, which was undertaken by Aurecon’s Wedge (member of KTW) and SAVE Units responsible for Community Development and Poverty Alleviation, also received a commendation in the Unique Design Aspects category at the 2009 Fulton Awards which recognise excellence in the use of concrete.

The Gauteng Department of Public Transport, Roads and Works (GDPTRW), in partnership with the City of Tshwane, has attained its objective of improving the living environment of thousands of residents in townships through its Twenty Township Roads Upgrading Project. Extending over a period of two years, the project culminated in the UTRCP project which introduced an innovative new technology to the road construction field.

One of its primary benefits is its ready accessibility by large numbers of small contractors on a large scale, as required by the Government’s Expanded Public Works Programme. The project placed great emphasis on the preservation of local resources.

Aurecon has recently been adjudicated one of South Africa’s top empowered companies by the Impumelelo Research Department in partnership with the University of Cape Town.

The Qatar Science and Technology Park (QSTP), an Aurecon project, was this month declared the building of the year at the 8th Annual Leading European Architects Forum (LEAF) held in Berlin.